The Iron Maiden is an S&S design that was ordered by Cpt Irving Johnsson in 1959, and subsequently used in the construction of a series of yachts. The first ship built in the series was Captain Johnson’s own world famous “Yankee” – Irving Johnson had it built to sail on the oceans and also on the inland waterways of Europe. In the following years approx 15 ships were produced based on the Yankee design, all built in Holland, each with an individual design plan from Sparkman&Stephens. 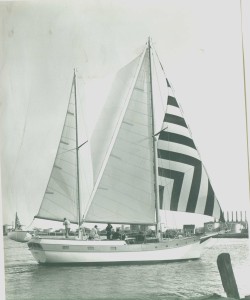 The Iron Maiden is most likely the second ship in the series, with ship design number 1279:2, and was named “The Caravan” to start with. Story has it that the first owner was a caravan salesman who died before the ship was finished. Other than that the history and whereabouts of the ship from 1960 to 1990 remain unknown to me. 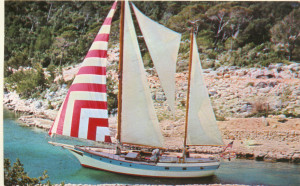 In 1999 the ship was for sale again – It was standing in Karlsruhe in Germany, at an industrial terrain at that point, and had been sand blasted on the outside. All interior was taken out, and not much was left apart from the actual steel casco – there were some parts of the railing, some turnbuckles, an anchor, and the old steel wire was left from the original ketch-rig, but the wooden masts had been damaged in the fire and later destroyed by rot.